It is just over 6 months since I got my Samsung ATIV Smart PC 500T.  This is an Intel Atom powered device with 64 GB onboard storage (added 64 GB via MicroSD) running Windows 8 (not Windows RT). 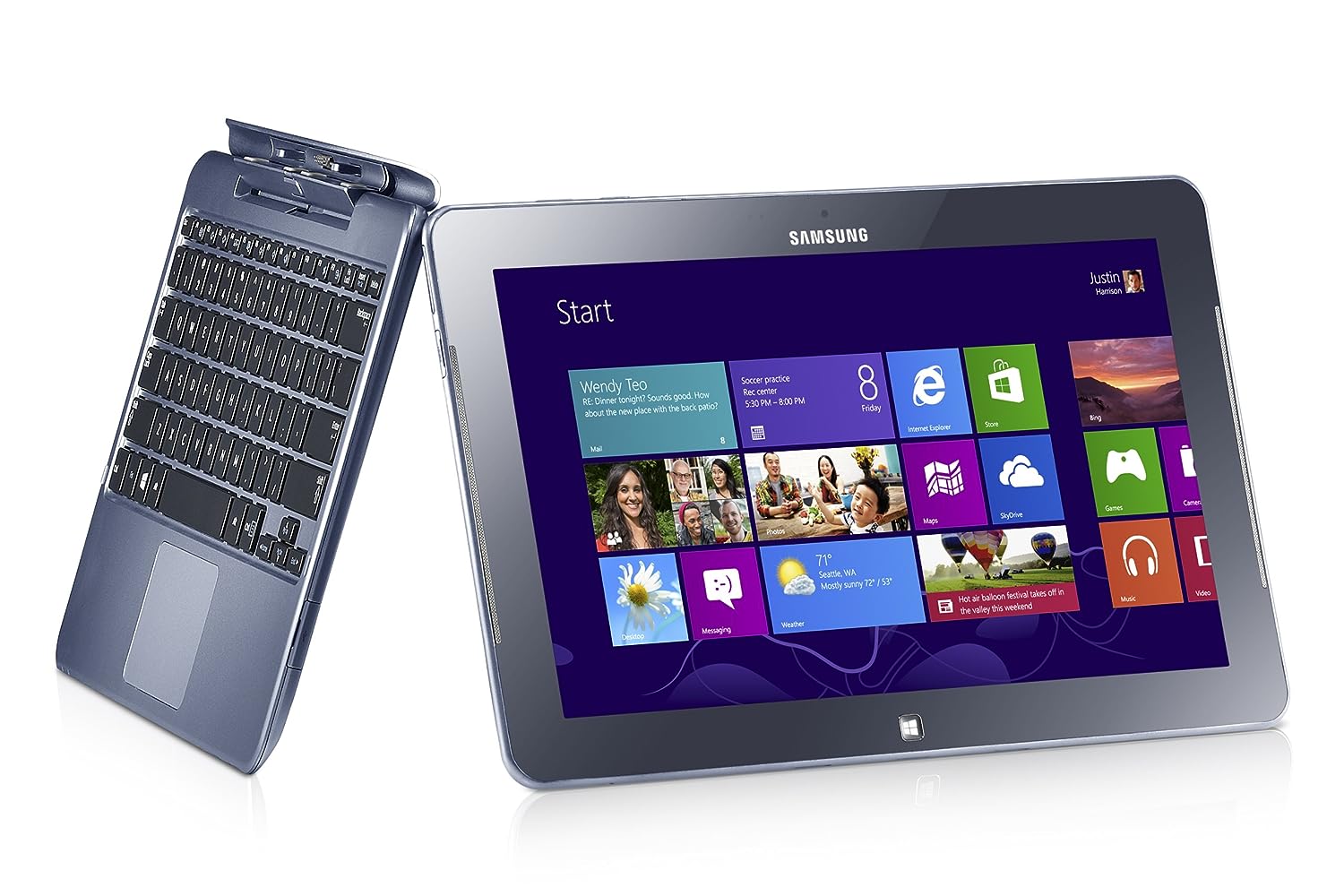 The device has worked pretty well … but not perfectly.

I never intended it to be a laptop replacement … where I run things like Photoshop CS.  It was an iPad replacement, that I could use at conferences, and hopefully on trans-Atlantic flights.  There it works perfectly.  I’ve regularly used it all day long at events, confidently leaving the power supply at home or in my hotel room.  It works perfectly on my lap when docked into the keyboard, giving me a laptop like experience, unlike a Surface with the floppy-hinged keyboard.  I also found the stylus (not just a Surface Pro feature!) which docks into the tablet to be useful.  Ever sit through a tech event and wish you could draw a diagram?  I can

I’ve switched from Evernote to OneNote (not MX) to make the most of this capability.

The battery goes on and on.  For example, I travelled from Dublin-London-Orlando in February and watched video in Dublin and London and during my flights.  The battery had charge left when we landed.  And this keyboard doesn’t even have a second battery!

The keyboard is pretty good (no, it’s not at the same level as a Lenovo laptop keyboard).  My Asus UX31 has an below par keyboard.  I preferred to use the tablet when writing/editing the latter part of Windows Server 2012 Hyper-V Installation And Configuration Guide.

How about presenting?  I talk tech, so white boarding is a big deal.  The stylus with the IsoBoard app are a nice solution to that.  Modern slim machines use full or micro HDMI ports.  This tablet has a micro HDMI port. I bought a VGA connector … hotel meeting rooms tend to have old projectors with just VGA.  That works … sometimes.  If there VGA cable is daisy chained between the podium and the projector then adding the HDMI-VGA converter degrades the signal too much to use.  I’ve since bought a USB-VGA adapter and am waiting on a situation where it’s required – it has worked in a situation where it was not required.

The performance of the tablet cannot match a laptop, and I didn’t expect it to.  It’s a tablet with an Intel processor … stressing the word “tablet”.  If you need more muscle then get a Pro machine with an i5 and 4 GB RAM … and the shorter battery life that goes with it.  I think it’s a bit disingenuous to try compare/contrast a tablet with a laptop.  They have different roles, like a screwdriver and a power tool.

Samsung are regularly releasing updates via the SW Update tool.  I’ve a new driver or firmware every couple of weeks, and they also distribute Windows 8 bug fixes (not to be confused with security fixes).  One bone of contention here: you cannot download any of the Samsung tools from the support site.  That means you cannot install a rebuild.  You must do a refresh from Control Panel and stick with the OEM build.  That is pretty damned awful … and makes the Samsung a consumer device not fit for business use.

There is a flaw with the h/w.  If you push the tablet while docked, it seems to un-plug and play it self from the keyboard.  You get the disconnect sounds in Windows.  It requires a full disconnect and reconnect.  I’m not the only person to experience this.  That is pretty annoying.

I used to mount the SD card in a folder and moved the libaries into the mount folder (on the SD card).  I’ve since rebuilt the machine.  Now I install Office, etc on the SD card.  My libraries are in the default location, and I do a selective sync of SkyDrive to the C: drive.  SkyDrive misbehaved when I synced to the mounted folder, regularly disconnecting and requiring a resync.  Keep it simple, stupid!

The big question: would I buy this device if I had to do it all again?

Good question.  I think I would, for the battery life.  I wouldn’t buy a Windows RT device.  I’ve tried a number of the competitive products, and while some are prettier, the Samsung is nicer, even if Samsung support is awful.  I would consider the Samsung ATIV Smart PC Pro 700T (think Surface Pro, but with docking stylus, and transformer keyboard like above, and twice the battery life of the Surface Pro).  But I do like 12 hours batter over 8 hours and the Ultrabook horsepower of the heavier/warmer device.

It’ll be interesting to see what comes in the coming months.  Pro machines should start to ship with the Intel Haswell processors (new Core i with more battery life) and a new quad-core Atom with better performance/graphics.  We also will see Windows 8.1 sometime this year, as a free upgrade to Windows 8 owners from the Windows Store.  One tablet I’m interested in is the Toshiba WT310, a business oriented machine with a transformer keyboard (VGA and RJ45) and TPM chip (BitLocker).