It wasn’t until I saw the spec of the new Toshiba Z10t that I realised all of the pro-style Windows 8 tablets were missing something: an RJ45 port that supports PXE boot.  Without it, how exactly are you going to deploy a Windows image to the PC over a PXE (network) boot?

A few months ago we saw the first photos and specs of the Toshiba Z10T, which they are sensibly describing as a convertible ultrabook.  Sure, a “tablet”, that is similar to the Surface Pro and others, undocks from the keyboard and it features a stylus (on select models) and multitouch and all that jazz that you expect.  However, calling something that costs $1000 or more a tablet and then expecting it to compete against $300 offerings from Samsung and the rest … that’s just insanity as we all now know.

The device has all the usual features on the “tablet” and features full sized HDMI (hallelujah!) on the keyboard as well as an RJ45 network port.  I got my hands on one for a few seconds today, booted it into the settings, and a LAN boot was one of the options, OSD fans will be happy to hear. 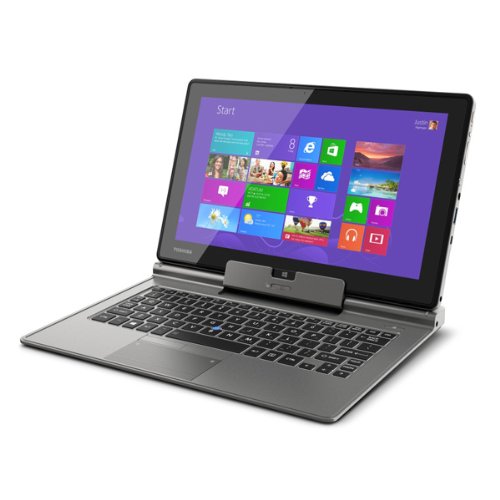 The model I played with was an i5, with 4 GB RAM and 128 of storage, and 1920 x 1080 screen resolution.  Typing enthusiasts: there is a backlit keyboard.  Like the Surface Pro, the battery is on the lighter side supporting just over 5 hours; it does not have a Haswell CPU.  There are USB 3.0 and SD (full) card slots.  Presentation fans: there is a real VGA port so no more dongles that work 50% of the time in hotel meeting rooms.

The machine is not going to win <insert country here> Top Model.  It is not pretty.  But this is a tool designed to do a job.  The material on the back is a tough textured plastic.  It’s feels like it will last over time.

This is an ultrabook first, tablet second.  It’s intended to be a replacement device and not a companion device. This is the machine you use at your desk, on the road, and for presentations.  There is also an i7 model.  These machines are not cheap.  They’re not to be confused with consumer machines; they are business machines, in my opinion.